Whom The Gods Would Destroy, First They Make Mad

The train wreck that would be my sleep schedule has just reached its denouement (and was never in doubt). The crescendo began about a year and half ago. But the general degradation of quality of life aside, at least it was manageable. But now after a dead tired day out in the wild doing a whole lot of nothing, the moment my back meets the bed I just know this will be longest night yet, and after a very monochrome and yet apocalyptic next day at the end of which I become exceptionally jittery and begin noticing shadows lurking in corners all the while wondering how am I not passing out, when I still can't sleep then I proclaim I don't really need it but I also know that the shadow realm is practically next door. Some indeterminate time later, before I can take note as to how, though I can't bring myself to care much about that because at least I got to black out, I wake up in the deathly quiet in my room, and logic dictates it should be some time in 2050, but I check the blasted phone and find that not even 3 hours have passed, because fuck logic.

Professional help had been sought, to very little avail. Sleeping pills are a tad overused at this point and barely works anyway so I know they are more trouble than worth. Breathing exercise and Zen bullshits are the worst. "Don't be so stressed" is a little better because it's correct, but also equally useless. If I exaggerate things then that says something about the state of my mind. Because I don't know how can I not be stressed when I can't fucking sleep and five minutes of googling tells me that we live in a world where Fatal Insomnia is not a made up phenomena. Benzo doesn't solve this chicken and egg paradox. Also, none of my erstwhile trusted methods work any more. I have begun to find Ulyssys readable, that's a red flag if there ever was one.

That's also when (the night of 24th) my laptop had to die. It was almost about 7 years old, originally intended to only be a cheap stopgap solution but somehow became a part of the "workflow". My still alive desktop hasn't caused any issue in like 12 years now (or none that a good old fashioned rage kick couldn't solve, that is). So it's kind of hard to pin down exactly when I became subconsciously convinced that my devices are immortal. But now, many conversations are flooding my mind where people told me their sob story about how they lost their work due to hard drive crashes and I was always like I am sorry to hear that. Except it's now my time for the reckoning and I have no idea why I have never even thought about backing up critical data before. The problem wasn't even disk related., it wasn't booting up (except for once in every fifty tries), and was probably due to some unrelated problem that had to do with power supply. Again I did send it to the 'professionals' first, except what they sent back only lasted about five days. I hate hardwares, I have never not been 'too old for this'. But I guess when you combine mania with lots of time the result can sometimes be interesting: 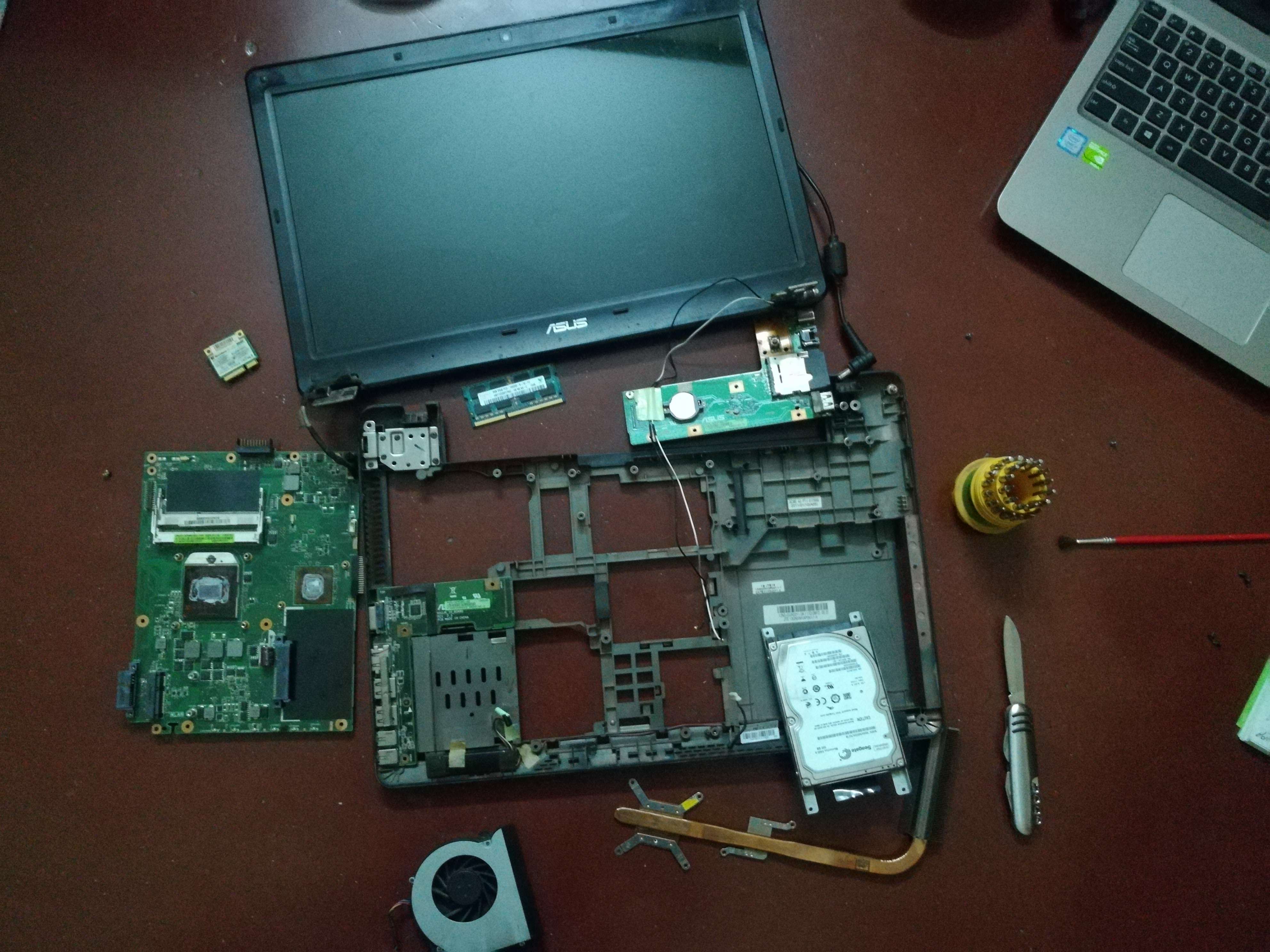 That was right before I borked the LED. In this picture I am reasonably sure the HDD was still healthy, but I wasn't. No attempt was made to retrieve data from it, instead I was hell bent on fixing something that I barely understood. Next guys I took it to were even worse. It's either them or some time in-between the HDD died (the infamous click of death); didn't know these things with 'hard' in the name can ironically be so fragile. And I can't overstate how big a blow that was. Of all the junks in it, the only things that matter weigh a few kilobytes at best and that's just …. painful to think about. Most important stuffs partially survived, pretty luckily I might add since it was as artefacts of an experiment involving rsync and ssh that I don't even recall any more, but the rest remains gone. Also, when I was naive I used to store passwords in plaintexts. After attaining 'enlightenment', I switched over to using password manager that autogenerates really strong passwords that I didn't had to memorize because they were all encrypted with a single gpg key. Now I have the files containing pure gibberish, except in my infinite wisdom I forgot to backup the said gpg key. Wow even I have to admire the hilarity.

But hey, although nowhere near guaranteed, it is possible to recover data from a dead drive, just wicked expensive. If you read up on hard drives, you would know why. In labs they do it in a room cleaner than most top of the line medical operation theaters because a single dust particle can doom it. However if one were to be really desperate and need it to work just once, assuming the reading head isn't crushed, it maybe possible to unstuck it from the platter and put it in the parking position without exposing it to the ambience long enough for it to be fatal in really short term. Why yes I could do it myself, in fact I believe the 15 minutes I spent watching youtube videos has made me a true connoisseur of the art….

See what I mean? I just can't seem to stop making things worse.

That said, I can't see how the following advice can turn out hilariously bad for you some time down the line if you do listen. Just back your shit up fam. Online, offline, both. Doesn't matter if NSA gets to read it. Just do it. The wise man learns from the mistakes of others.

<2017-10-17 Tue 22:06> Update: Well, it was amusing to note that shortly after this post, this year's Noble Prize in Physiology/Medicine was awarded to a work that shed light on the inner working of our biological clock. I mean, since I can't see how from here we can make the leap of abolishing sleep for good, this is hardly interesting. One day, I guess. However, that spurred me to revisit a line of attack I previously discarded for some reason. See, the secretion of the hormone melatonin is tied to the ticking of our biological clock and is said to be a strong factor that delineates sleep and wakefulness, so makes sense it can be used to fix broken circadian rhythm. In fact I feel really dumb for not trying this already, specially considering it seems to be popular enough to be sold over-the-counter in US and get rebuked by the popular media for it. But hey, after a week of trying this out with some discipline for a change, lo and behold I can now actually fall asleep in time. The duration I manage remains poor, but surely that has to improve?!