Analysing Writing Habit in Org-mode: With Elisp and R (Tidyverse)

I got into Emacs in late 2015, and I immediately took to writing more. A neat personal knowledge management system grew around it, but I also became more serious with keeping diary. It hadn't been a habit I could make time for everyday, but by and large it had still been a habit I managed to stick to with the most consistency.

With the end of 2021, I now have 6 years worth of journal to reflect on. Before org-mode I still used to take notes, but there was not much structure or consistency to it. And then I managed to lose those files in an HDD crash anyway.

I am not really doing this to find some sort of insight buried in data. I mainly want to showcase the capability of Org-mode as a structured format, which allows one to easily get programmatic access to the parse tree of their documents which they can traverse and manipulate. This, in theory, should make doing analysis very easy. Let's see how that assumption fares in practice.

Also, I am going to do as much literate programming as possible using org-babel, which is like Jupyter notebook except it doesn't suck. This whole post is executable code.

We start with an easy one. Something that could be accomplished in one line with wc from coreutils.

My diary structure is simple, there is one file per year, aptly named after the year:

Each file has top level headings, denoting each month. Subsequently each month then has children that at some point denote particular day which we will leave for later. For ease, I am going to use a great library named org-ql that lets you declaratively query for things in your file.

Which is neat. I am using cons cells because soon I want to export data for all years into CSV, and that makes it easier. But if I wanted to format output/value of this org-babel cell directly into org-mode table, I needed but to use a generic list.

Time to get all data dumped as CSV, as promised. This is kind of grunt work.

I wasn't really sure how the data ought to be oriented. But I also didn't care to weigh pros and cons of it one way or another. Because I can just enable csv-mode in the resultant buffer, and if I wanted to transpose, I only need to invoke csv-transpose (C-c C-t). And voilà,

Note also that the column name should be changed from "Year" to "Month" to reflect shape change. This is like hidden cut in those so called single-take films :P

Anyway, it also doesn't really matter, because we are gonna make way for R to arrive and pick up from here, for which this stuff is bread and butter. But okay, we keep the transposed version by simply saving the file. And now, typically I work with R using the phenomenal Emacs Speaks Statistics package. But I want to keep using org-babel, and it of course there is a session feature which even uses ESS under the hood. We need to first load it up,

On R side, one might want to install the "ascii" package as well, as with it one could get tables formatted in a way that's directly compatible with org-mode.

From now on, we are going to be (conceptually) passing every R source block a :session argument For example,

But since that can become tedious, in reality I would be adding this to the top of my org file, and have it apply to all R source blocks automatically.

And now the great thing is, the above snippet automatically produces an org-mode table (have to pass :results output wrap), which in turn gets turned into HTML by my blogging system (Hugo). And after sprinkling some CSS to it, what appears to you is:

So it reads the CSV file fine.

Now we want to produce some plots (using ggplot2 of course). But how would they appear here? Do I write functions to output them to some image file, and manually link said file here? Nope, org-mode can do it all for us!

We just need to set some path for both R to write to, and blogging system to automatically pick up and link the image here. I think the only way for both to work is if I set current dir in R to wherever this post is, and then use relative path for the static file destination.

Setting path in R, by interpolating an elisp variable, could be accomplished with:

Amazing that we can make two different languages talk like this! I guess I didn't even need to generate intermediate CSV?!

And now, let's define a function that can give us the relative path for the static image folder. We don't even need to do this mentally. We can figure out the well defined common ancestor, which can be the project root (a little late but Emacs nowadays has built-in project.el for all things project related, so no need to reach for third party packages like projectile despite how awesome it still is). And then we can simply get the static asset folder for images from there (creating, if not exists). And finally, we can ask Emacs to calculate the relative path from this post directory to the image folder!

That's what we want! Now we will be asking ESS to save the image file in that appropriate directory by passing :output-dir (get-image-asset-dir) to the block, but that's also something you could make global by defining on top of the file, like before. 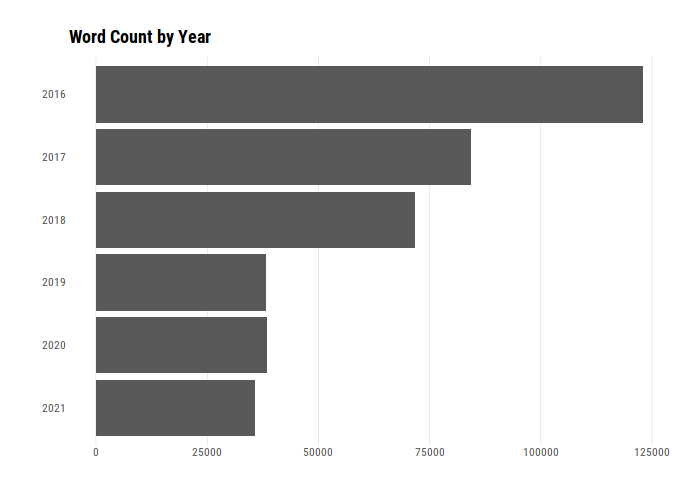 On a tangential note, previewing the plots inline in org-mode as well as having the links work in published site generated by Hugo, posed an interesting problem. In both cases the relative path needs to be backed by actual content: a file in the filesystem in the first case, and a static asset for the webserver in the second case. However, by design hugo takes the things in assetDir (which is static/ by default) and splatters the content of it across the root of the published directory. Which basically means the assets URI necessarily needs to be stripped off the top level assetDir part. Because as is, the links we are generating for the plot which enable us to preview images inline in org-mode no longer work in published document.

Could the converter/exporter be somewhat clever here and fix those links? I am not sure that's within their purview of responsibility. However, there is a way to stop Hugo yourself from stripping the top-level asset directory in the first place, which would solve the issue at its source:

Anyway, this confirms what I already know. The volume was only really good the first year or so. Now it has shrunk down to almost 25% of 2016 :(

The UNIX hacker is smirking thinking how we have only now achieved parity with what wc could do in one line. Though if you twist the question a little bit, like how about word count grouped by months instead of year? And now wc will have no answer to that. but we have the foundation to quickly leave it to dust. 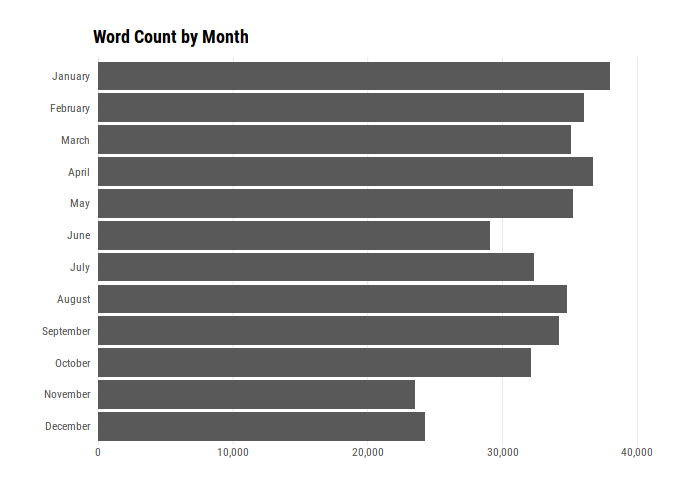 Hmm that's something I didn't know. Apparently for some reason I really don't like to write in November/December? I think we should normalise the numbers within particular year though, because the circumstances each year probably were very different. Btw, R has anonymous function now!

It's pretty much same apart from some subtle changes. Now August pulls ahead of January and April, by virtue of being more consistent against other months in same year. That tracks I guess, I probably spend more time indoors in August because I live in tropics and that's when monsoon hits and I really hate muds and clogged waters everywhere.

Volume in terms of word count is one thing, but I want to know how consistently I showed up to write over time (without being late or missing days altogether). As I hinted, there is a header some level deep that's the date, and the content therein is basically the entry.

The date is easily parseable as it stands alone in the header in dd.mm.yyyy format (yes, not very ISO 8601 of me).

Back to the ∗scratch∗ buffer for some more elisp.

Before we can figure out missing days, first we need a list of all days in a year. This works:

Now we want to calculate how many days have corresponding entry in the diary:

The difference in these two sets are basically the missing days. Let's generalise that across all years:

Although it works great, it's still slightly misleading. Because when I do miss a day, for the most part I try my best to go back and try to plug the gap later. Which is great, but we want to also see how often we are late.

That would be impossible to do, if it wasn't for the fact that I have some helper function that generates the boilerplate before I write which takes care of creating headline and most importantly current timestamp.

It got a little complicated because I had to account for my nocturnal nature (sometimes I begin writing way past midnight, but I don't want to count that as "late").

However the result is still kind of horrifying.

We can now generate report for all years:

Well, isn't that a grim reading.

Well I already knew in my bones that I am doing worse at writing, so that's no news and that's not what I was trying to highlight.

But it was a good medium for showcasing the capabilities of org-mode because I didn't set out to keep journals with the intention of later being able to do any of this. Org-mode is simply good at being a text based database.

The other thing I want to say is, Elisp is a damn good general purpose language. Just because it's married to a text editor doesn't change that fact. It has almost all the features and basic libraries you come to expect from any modern language. Only glaring problem is probably the concurrency shortcomings but hey it's not like popular languages like Python, Ruby or Javascript covers themselves in glory there.

In my experience, the detractors of Elisp are mostly CL users. They also love to rain on the parade of pretty much every other Lisps, and they are not above gatekeeping about what makes a Lisp and what doesn't. If you look at Github Stats from 2021 Q4, by commit push count Elisp is at #29, whereas CL is nowhere to be found in top 50. By PR new count, Elisp is at #31 whereas CL is again nowhere to be found. By new issues count, Elisp is at #22 and you can finally get a whiff of CL at #46. Elisp is the most popular Lisp in the world along with Clojure, which probably explains the salt.